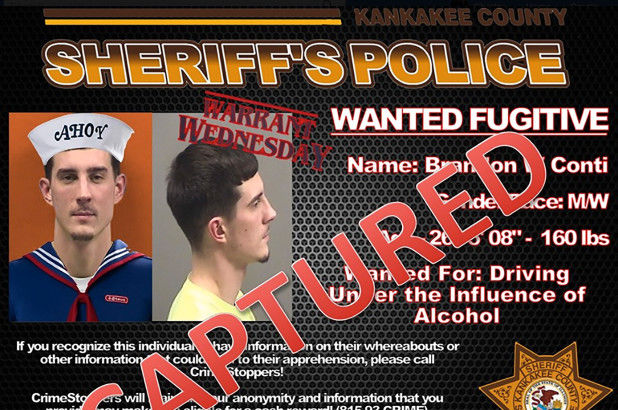 As reported by New York Post, an Illinois man wanted on a DUI warrant recently agreed to surrender himself to the Kanakee County Sheriff Department, but only after the Department agreed to Photoshop a Halloween costume onto his mugshot.

Mr Conti had failed to appear at a 30 September Drink Driving court appearance.

The day before Halloween, Brandon Conti himself commented on his Facebook page mugshot, stating that he was 'appalled' at his lack of a Halloween costume.

The costume was a sailor's outfit, complete with a sailor's hat featuring the word 'AHOY' emblazoned across the brim.

The revised mugshot was accompanied by a request from the Department that Mr Conti 'sail' himself in and surrender.

Mr Conti replied with two laughing emojis and a thumbs up, before agreeing to hand himself in.

Brandon was released on bail with his DUI matter to be dealt with on a future date.

The blood alcohol concentration reading was not disclosed.

With a previous conviction within the last 5 years, which is not suggested is the case with Mr Conti, the penalty range, depending upon the previous reading, ranges from 3-18 months if the previous was low or mid range, through to a 6 month to lifetime loss of licence where the previous was a high range offence (a reading of 0.150 or above).